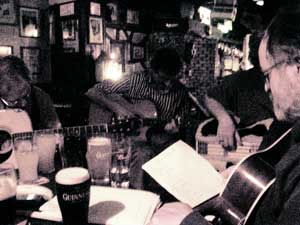 The rain has let up a bit in the last couple of days, so it was with instruments over the aul shoulder that myself and Guy Noir went strolling across town for this week’s Shack Pub session.

While he has aspirations of learning the harmonica, Guy is not a musician and was, I think, intrigued by the prospect of an evening of music in an Irish pub. In the door we met des who, in usual form, had a pint on for me within seconds. The sheriff was next with the fingerpicker and ze germanz not far behind. The Sheriff was in good form and the two of us had a stab at ramblin man.

There must have been something in the air that night because the session was lively, relaxed and open. Whatever it was, a couple of unusual things occurred.

The first was the arrival of a box player from the bar who injected a bit of lively trad into our otherwise modern Tuesday session. Apparently, she participates on a Thursday in the session in Potter’s Bar – one I’d been aware of, but never attended. I might have to stick the head in next week.

The second unusual thing was the arrival of wifey. Of course yours truly was thrilled to see her, as she rarely makes it out on a Tuesday. At the end of the night she actually took the guitar off me and accompanied herself on a lovely treatment of Damien Rice’s I Remember.

Fair play to the girls!