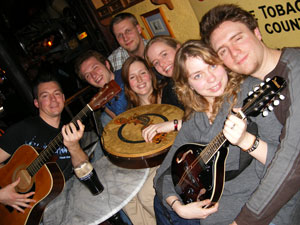 Well, it may have been pancake Tuesday, but it was a mad one for the Shack Session. I decided to hoof it out shackwase with a light load of mandolin and bodhran instead of guitar. There has been a predominance of guitarists and I thought it might add a bit of variety to concentrate on other instruments. Little did I know, the poor Sherrif turned out to be the only guitarist for a good stretch until the fingerpicker arrived whereas CB and hardy brought bodhran and mandolin.

In any case, we had a HUGE crowd of mostly French exchange students. Lookit’em there – all big smiley heads on them there clutching those Irish instruments that some twisted photographer thrust into their hands. Normally you’d need to be on parislogue for that kind of craíc.

I think the atmosphere prompted some strange things in the music as well, as this bizarre version of Frère Jacques can testify to.

This week, the Sherrif composed an anthem for the Shack Tuesday Session. How cool. Now we have our own theme song! COME ON THE TOWN!!