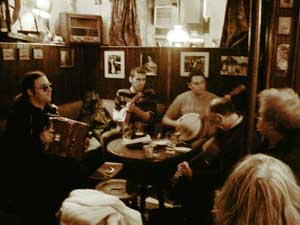 This Sunday in Seans saw its Amber Moon musical core augmented by loads of additional heads, including some of the Brideswell crew. Guitars, bass, flute, uillean pipes, accordian and singers kept the place humming from early afternoon into the evening. It’s good to see because, for the first time I’ve heard of, Sean’s Bar no longer has music seven days a week. If you should happen to drop into the place on a Saturday, Monday or Tuesday night you’ll find the musicians’ corner sadly empty.

Sunday’s session, however, was buzzing away. Unfortunately, I stumbled into the place quite late and only caught the tail-end of things. Worse, my little recorder managed only to record this little musical tidbit. But it’s a feisty one wherein the assembled punters in Sean’s more than made up for the diminishing number of musicians . . .

Okay, okay – so maybe it wasn’t the recorder, maybe it was human error. What do they put in those pint glasses?