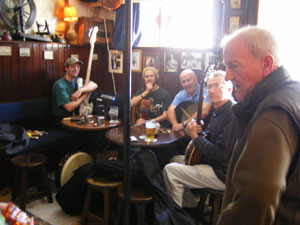 Due to a certain hospitable pub in Ballinahown I happened to be in on Saturday night (and a good few hours of Sunday morning, actually) I was not up early on Sunday. The mobile rang into my aching world at around half one with the bean on the other end of the line.

“Any chance you’re up for the session?”

I made the kind of noise a wounded animal on the Serengeti might make as it succumbs to its wounds.

Another groan as my brain caught up with the reason for the bean’s call. With a superhuman effort I managed speech, “Pretty empty down there?”

I debated wallowing in my misery in a darkened bedroom or sucking it up for a few tunes down in Sean’s. I closed my eyes and the room began to spin a bit. Feck it.

My tottering entrance into Sean’s was greeted with amazed bemusement by only a pair of musicians in the corner: the bean and ze germanz. I knew two thirds of the moonarinos wouldn’t be there (Angel was off in Switzerland and damsel was otherwise occupied), but I was surprised to see the usual crowd of musicians was nowhere to be seen.

“What happens to you?” ze germanz asked, chuckling at my unsteady arrival.

“A pack of wild beasts,” I replied, allowing the bodhran and guitar to slip from my arms. I slumped gratefully onto a stool and put my head in my hands. Yes, sports fans, it was touch and go for the first few minutes but I was somehow able to pull myself together, tune up the drum and guitar and we were off.

The bean and I played a standard from our 5 Finger set to kick things off. My hands and vocal chords functioned as if separate from the man they belonged to – thank God for that. Then an older man came in and, commanding the attention of the room, practically shouted out this song to the great appreciation of those gathered around (pictured above left). The electrician arrived with his bodhran and Jbanjo joined us with his banjo and a dobro to give us some bluegrass. The session was looking up.

Soon afterwards, the Arizonians arrived on the scene. It was their last week here in Ireland and they are making an effort to get in a few last sessions. They gave us a bit of trad and, I heard, kept the musical fires burning there in Sean’s until around 6pm. I’m unable to report upon what actually transpired – as I retired my aching body a little after 3pm.