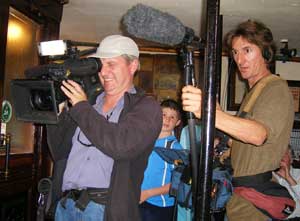 Another week, another Sunday in Sean’s Bar.

It was a lively, if sparsely attended, session. I left around 3pm to trade the instruments for a munchkin (just up from her nap), figuring to give wifey a break and munchkin a chance to enjoy a little music. What I didn’t figure on was an Australian television crew arriving on the scene. They were from Australia’s Seven Network filming for their The Great Outdoors show.

By that time the bean, T.banjo and ze germanz were all that was left of the session (not including the munchkin and her egg shaker), but the camera crew didn’t seem to mind, sweeping around the bar, interviewing patrons and buying us all a round of drinks. Munchkin was fairly well-behaved despite the all the cameras and lights.

Ze germanz joked, “Only they have now only two Irish for their Irish session,” 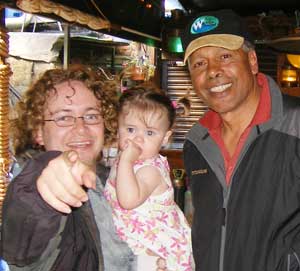 “Eh, three!” I corrected him, pointing at the munchkin who was busy trying to insert a cheese and onion tayto into her bottle of pineapple juice.

The Ozzies explained that The Great Outdoors, a travel show, was shooting an episode on the river Shannon and couldn’t resist stopping to spend some time in Ireland’s oldest pub. They were pleased to have caught live music and promised to send us a DVD of the show once it was edited.

So the munchkin’s television debut will be in Australia. You really never know what will happen to you when you stop into Sean’s Bar for a pint.