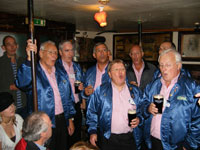 Well, this Sunday the session in Sean’s was truly something unusual.

As this weekend was the Irish International Barbershop convention (and not a couple of weeks ago, as I had thought), we were surprised by a group of lads who stopped into Sean’s Bar and gave us a couple of tunes. After repeated requests to sing another, they got up and gave us a lovely version of My Wild Irish Rose. 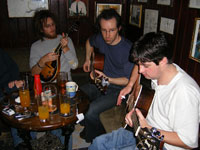 The Murray sisters arrived briefly but, as usual, seemed more interested in local sports than sticking around. Fair play to the girls, they cranked out a couple of lively tunes before high-tailing it to some pressing arrangement. Laura was discussing the shenanigans she got up the night before.

“Did you drop the hand?” the Bean asked.

“What was his name?” Bean asked.

“Actually I dropped the hand a few times last night,” she added, a smile tugging at the corners of her mouth.

“For my pint,” she finished, rising to leave amid groans from the table.

The songs continued into the afternoon with Milo, Anne-Marie the Bean and myself. Bill Coleman was there as well, bringing a welcome addition to the group. The pub must have been full of music lovers, because it often grew quiet during our tunes, allowing us to explore a level of dynamics we don’t usually have the pleasure of doing. Here’s a sample of Anne-Marie singing Black is the Colour.