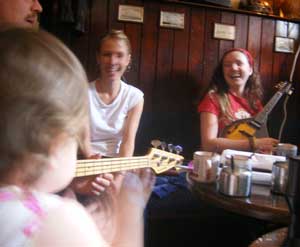 The oldest bar in the world and the, ah, maybe not the oldest session, but certainly a good old session if’n ya know what I’m talkin’ about . . .

That picture there is of the munchkin clapping and the goils laughin with her. But I get ahead of myself

I stuck the head in solo early on and caught the moonies at their usual shenanigans of great tunes, great songs and great scott – who’s yer one? What? Nevermind. Hang on, listen to bean singing the blues.

There; that’s better, isn’t it? In any case, I returned later with the munchkin who occupied herself swaying back in forth, hopping furiously or just bopping in place to the tunes. Don’t we all wish we were free enough to join her?