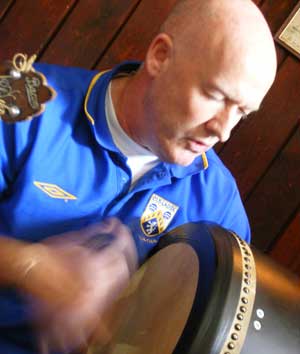 It was a far less frantic version of myself that stuck the head in this week at the Sunday Sean’s Bar session.

I was glad I did, as the two young tunesmiths from two weeks ago were there showcasing their skills among a large crowd of other talented locals. Here’s a breakneck sample of the whizz-bang traditional brotherly ceoil.

As I had arrived later in the afternoon, I missed the bulk of the Amber Moon contribution. The Amberinos (Moonies? Hmm? Noo?) were all a-buzz about attending the Lunasa concert later in the evening and as they vacated the corner seat, our local electrician brought his able bodhran playing to bear on this tune here with an intro and a wee bit of help from big M.