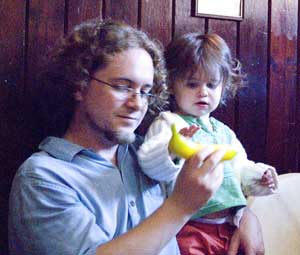 It was a very ill-advised course of action Saturday night.

Let’s just leave it to say that it involved my participation in a stag night and then a gig somewhere in town that migrated from behind the microphones into the back smoking area until it was so late the publican threatened to leave us locked in ’til morning if we didn’t get a move on.

Nevertheless I was up at the crack of noon Sunday and, showered and fed, made my way down to Sean’s Bar where I was expected as session guitarist.

Yes, I was faced with the terrifying task of backing traditional music on the guitar. Luckily, the session was well attended and the numerous instruments and able playing of those around me mostly cloaked my fumbling attempts. Damsel and angel were there to represent Amber Moon and fishty arrived with fiddle to fill in the gaps in addition to a number of other luminary regulars.

Here’s a sample of me backing fishty on a tune (I have, of course, selected one of my more successful attempts *grin* ).

There were some really lovely moments of music at the session, most led by angel. For example, Milo took the guitar off me and I picked up the bodhran for this tasty version of Ellis Island. A bit later, Fishty and herself backed me up on this version of Forever Young, which seems to have aged like a fine wine overnight; that is to say it sounds a lot better as I listen to it this morning than I thought it did when I was singing it yesterday.

In all, I think I’ll be investing some time in building my trad guitar repertoire (hooray, it rhymes!).

Sean’s Bar was full to brim with US tourists on Sunday who happily tapped their feet and snapped numerous photos of the session. Must be one of those big tour bus groups, says you. The photo above left occurred when wifey and the munchkin joined us near the end of the session, so there’s Ireland’s youngest trad participant in Ireland’s oldest pub – now for ya!