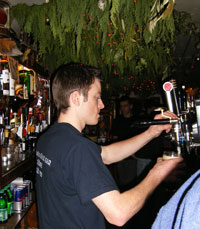 It was Christmas eve and there wasn’t a seat to be had in Sean’s bar. The ceiling was adorned with the yearly branches of pine, bits of holly and even the occasional mistletoe while the staff worked away beneath the twinkling fairy lights.

Over in the corner, the usual musical shenanigans were up and running, with a rotating band of music makers passing in and, ah, passing out of the pub.

Here’s a lively tune on the accordian.