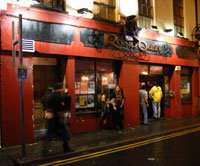 It was a wet one last night.

At the end of the slick roads we drove last night was Galway and The Roisin Dubh. It being our first time playing this prestigious venue we didn’t really know what to expect. Truth be told , the last time I’d stopped in at the Roisin Dubh was years ago – and my, has the place changed.

The cozy little bar I remember has been changed significantly. Downstairs toward the back and through double doors there is now a huge club-style stage and bar area. We were playing upstairs and shlepped the gear up a couple flights of stairs into the new upstairs bar. It was a cozy little area with a large rooftop beer garden opening up just down the hallway. The garden was a blessing and a curse in that every smoker downstairs stopped by; some lingered attentively, others raised their voices to continue their conversation despite the ongoing performance. 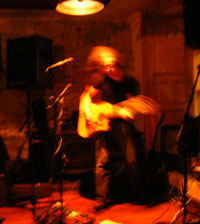 We had set up in short order and took the stage so quickly things were a bit of a blur. The audience was pretty great and Kim was in good form as evidenced by her performance on our spanishy-sounding song, The Ex-Patriots. You’ll hear the chatting from the beer garden in that recording.

Bill threw out a dynamo of a performance, tearing into his set like a fat kid into a bag of crisps. I especially liked the night’s version of Don’t Suffer in Silence. 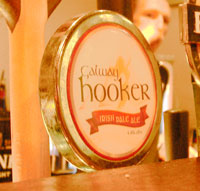 There was a metal band playing downstairs, but the soundprooofing in the Dubh is pretty good. The noise from below never got louder than a dull thump. I was also EXTREMELY pleased to find that Galway Hooker, the first Irish microbrew in Galway in maybe the last century, was on tap.

And um, a “Hooker” is a type of boat (for those of you sniggering in the back there).