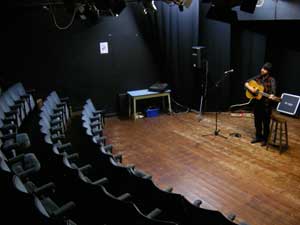 Hailing from the most northwest corner of the most northwest city in the most northwest state in the lower 48 United States, he comes once, maaaybe twice a year to Ireland: a troubadour lugging a massive, but necessarily rugged, white flight case for his guitar. He carries one set of clothes – slacks, shirt, vest, shoes and hat. Sometimes he keeps an extra vest with him.

Scorning busses and trains, he mostly hitchhikes from gig to gig across Ireland. He carries no mobile phone, books no hotel room. Just when the crowd is restless at the club he’s playing that night, just when it’s 3 minutes before he’s due onstage, just when you think he’s not going to make it this time . . . he arrives, hefting his flight case from the depths of a samaritan’s car boot, bright smile splitting his black-bearded face wide.

This time he comes equipped with a new album and a new name: Robert Sarazin Blake.

Why the change? In his words:

“I used to tour around the U.S. and occasionally Ireland calling myself Robert Blake. But now I’m Robert Sarazin Blake. And if you don’t know why I would add a middle name then that means you’re really unfamiliar with the tabloids in the United States . . . and that’s fantastic.”

At the moment, Robert is in the throes of a three-week Irish tour. He kicked it off in Ballymahon on Wednesday playing an opening slot for David Kitt in the Bog Lane Theatre. Pushing the mic aside and scorning a lead for his guitar, he thrusts a fantastic 7-song unamplified set upon the 68-seat theatre crowd. Half the time all six guitar strings seemed in danger of snapping under his furious assault. Bellowing and honking from somewhere within his beard, he drops suddenly to a lower-than-speaking volume vocal line accompanied by the gentlest brushing of strings. I was lucky enough to capture the moment. 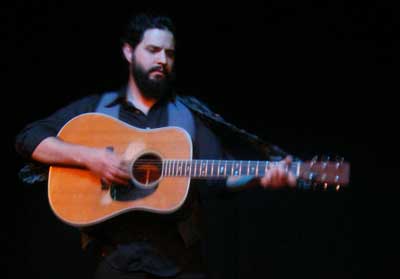 His songs are all about the romantic trysts and nostalgic vignettes of otherwise unexceptional people. Half-spoken/half-sung, his music effuses disappointment and elation, alcohol and girls’ names ooze from the corners. Oh yeah, and he can write a real zinger of a political song as well. His voice isn’t what you’d call refined, but it’s used to great effect over his mostly narrative compositions and spasmodic guitar playing.

Just over a year ago, we played a few shows with Robert during the tour to support our album release. There were times he disappeared, chasing a girl whose name he wasn’t quite sure of, leaving us to mind his bags and guitar. He’d usually ring from a bar late the next afternoon without explanation, assuring us we’d be on time for the next show . . . if we left right after this pint.

At times affectionate, at time distant, his head is cluttered with old songs and apprehension. He often stops to exclaim on the remarkable nature of one mundane moment or another. He cuts an ideosyncratic path through the world, scattering songs like breadcrumbs in his wake.