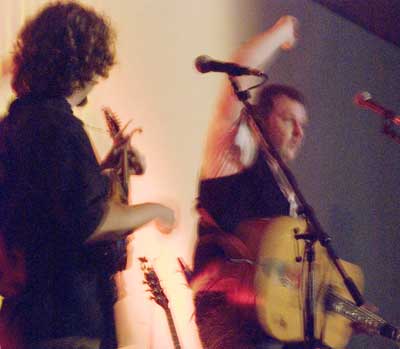 The Sarah Ryan benefit concert was a resounding success – the proceeds were enough that our favourite 6-year-old will be heading to the U.S. of A for the treatment that may someday allow her to walk.

Awesome. Fair play to Charlie McGettigan, Fiach, Mundy and especially to Emer (who put the whole thing together). Knowing that there are people who will go out of their way to make a difference in a little girl’s life is an awesome feeling. Well done to everyone who participated and everyone who bought tickets to the show.

Man, I was so nervous in the days leading up to the show. I was such a basket case that Wifey actually kicked me out of the house the evening before.

“Go get a pint in Sean’s or something,” she said. “I need to re-string,” I protested. “Oh, bring it with you, no one will care.” She was right. I had sat amongst some supportive friends and was just feeling a bit of the stress steam off of me while pulling the the first string off when a bridge peg literally snapped in two. Everyone at the table, without me saying a thing, instantly began ringing friends with guitars. It was 5pm on Saturday, but a panicked call to the local music shop kept them open a few crucial extra minutes so I could jog across town and get a new peg (cheers, Benny!). 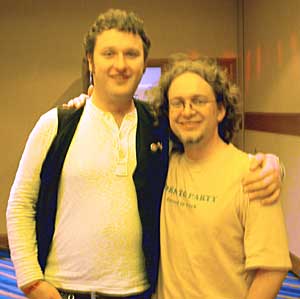 The night itself went really well. Turns out Mundy really is as chilled out and cool as everyone says he is. He was just back from Electric Picnic and not feeling his best, but he really gave it socks anyway. Backstage he commented “I’m dying . . . it’s too bad, because the audience is great . . .”

Not that they noticed. Singing along and cheering, his performance was very well received indeed. The best moment was probably Mundy’s encore performance of Galway Girl. The crowd rushed the stage and when he started singing the mandolin part I said, “Ah, feck it!” and leapt onstage, grabbed the mandolin and began playing along. Mundy rewarded me with a big grin.

So now, in case anyone asks, I officially rock.

So how do you follow Mundy on stage? Well, you just don’t worry about it. We knew people were there to see Mundy and we were, as one friend put it, “music to finish your pints by.” I figured most of the audience would feck off after his set and most folks did, but a good number stuck around and rewarded our efforts with cheers and clapping. The bean joined us for half a dozen songs in the middle and the three-part harmonies we had rehearsed sounded brilliant. Fair play to the bean for joining us onstage for songs like this one.

Our set was loads of fun and wifey’s voice was in fine form. In all, we knew we were there for a good cause and just had the craíc playing our music. Wifey almost lost it when I spontaneously changed the chorus in one of the songs we were playing to “I hope you come and see me play with Mundy . . .” If you listen to the recording, you can hear how great the audience was.