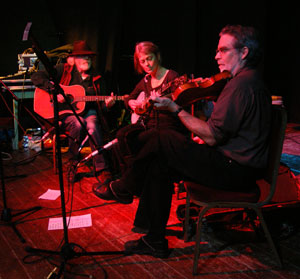 “We call it ‘old-timey’ music . . . although I suppose it’s pretty new compared to the Irish stuff.” Thusly did Moonshine introduce its style of americana-meets-trad-and-bluegrass to a small audience last Saturday.

Moonshine is the latest outfit of former Sweeney’s Men and Planxty musician, Johnny Moynihan. This legend of Irish music finds himself if talented company as evidenced by his new trio’s performance this weekend in Ballymahon’s Bog Lane Theatre. The concert was another one of of No Ego‘s surprising shows.

Surprising, you may ask? Well, getting people and groups that usually play to thousands to appear in an intimate 68-seat theatre in the country is an amazing feat that No Ego has been pulling off for the last 6 months, starting with the Damien Dempsey concert last year.

Johnny is credited with introducing the bouzouki to Irish music. To see this influential figure humbly restringing his mandolin and sharing a few classic tunes with an audience was a real treat. Lena Ullman and Frank Hall, the other two thirds of Moonshine were definitely not overshadowed next to Johnny, but blended magnificently. This song shows their relaxed harmonies at work. The three gave it socks like they were playing to a much larger audience and then retired to a local pub where they continued to play into the night by the open fireplace.

And why not? Sure, isn’t it great to see people doing what they love at any opportunity?