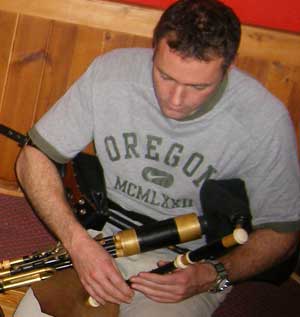 This week’s Irish instrument is the Uilleann Pipes.

Pronounced “ILL-ehn,” the name of the pipes comes from the Irish word for elbow – uílleann. Uilleann pipes are distinct from the more widely-known Scottish bagpipes by their bellows. Instead of inflating the bag with breath the way one would a Scottish set of pipes, the Irish pipes are inflated using bellows, which are strapped to the player’s elbow and pumped regularly during performance.

Originally, the Irish pipes resembled the Scottish bagpipes and were called píob mhór “great pipes.” Sometime around the end of the 16th century, the design began to change to include bellows instead of breath as well as changes to the drones and chanter and introduction of the regulators. The earliest recorded mention of these new pipes in found in Shakespeare’s play The Merchant of Venice (published in 1600 – Act IV, sc. I, l. 55), wherein one character misunderstands the name of the pipes to be “woolen pipes.”

The Uilleann pipes are (primarily) an indoor instrument and are played while sitting. They have a sweeter, quieter sound than that of the bagpipes as well as a larger range of notes. The chanter is the flute-like piece the player uses for melody. The drones do exactly what it sounds like – drone out a note in tenor, baritone or bass range. The full Uilleann pipes also include regulators – tubes that function much like the chanter to produce harmony and melody alongside playing of the chanter. The bellows of the Uilleann pipes also free the piper for singing (should he or she be so inclined).

I find bagpipes to be a bit overbearing and better appreciated alone and from a distance – a solitary piper playing across a valley, for instance. The uilleann pipes on the other hand are a lovely addition to a session, blending well with flutes, fiddles and other melodic instruments and lending a depth and character that other reed instruments lack.

Here is a video I shot where Michael Vignoles, a Galway uilleann pipe maker, demonstrates a set of pipes he’s building.

Here is a sample of pipes played at one of the brideswell sessions.