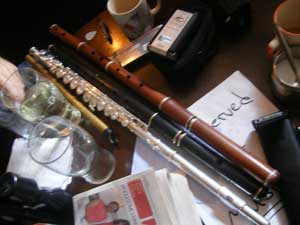 This week’s instrument is the Irish flute.

The picture to the left there was taken at the Sean’s Bar sunday session while a very patient damsel awaited my photographic portrait of her instruments before plucking one of the three from the table and proceeding with the next song. Shown in the photo are (left to right) an Irish whistle, a classical-style flute and then two Irish flutes made of different woods.

I really wish I had a better photo of the lighter-coloured one there because it is a particularly lovely looking instrument.

Moving swiftly onwards! The Irish flute is almost always made of wood with a detachable mouthpiece section. Flutes differ from whistles in that one blows across an apeture rather than down into one. The Irish flute is played almost identically to the classical flute, differing only in range – the keyed concert flute is, obviously, a chromatic instrument whereas the Irish flute has a more limited range to its lack of keys (although some do actually have one or two).

Flutes are quite common at sessions and, unlike some instruments, lovely when there’s more than one chasing the melody or harmonising with one another. Personally, I really like the look of a wooden flute. The earthy tone one gets out of it is well suited for Irish music and provides a lovely counterpoint to the sharper-sounding Irish whistle.