Irish instrument of the week – bouzouki 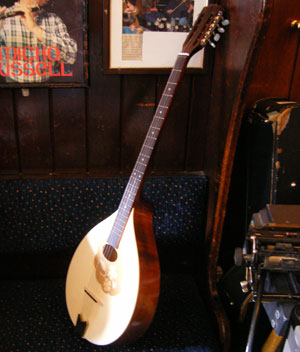 This week’s Irish instrument is the Irish bouzouki.

In the 1960s, Johnny Moynihan (you remember him from my Moonshine post, right?) introduced the bouzouki to Irish music. While it might seem an odd choice, the bouzouki fits very well into an Irish session, occupying a perfectly mid-range pocket below the mandolin and the reedy sound of flutes, uilleann pipes, accordians and whistles but above that of a guitar.

Andy Irvine picked it up from Johnny, making it quite famous in Irish music and coming up with alternate tunings, but it was Donal Lunny who invented the Irish bouzouki as a distinct instrument. Doing away with the ornate, round-backed Greek shape, he created a small-bodied flat-backed bouzouki with more of a punch for its application in Irish music.

Here is a guitar/bouzouki duet from one of the Brideswell sessions.

The photo above is the bean’s new bouzouki . . . .ooooooo, lookit!