Irish instrument of the week – bodhrán 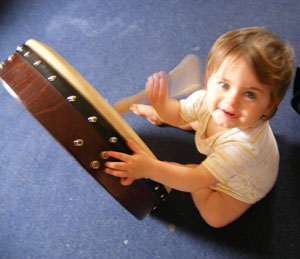 Seeing as the last couple of posts have involved the Irish drum, I thought I would start a series on Irish instruments here with a piece on noble Irish bodhrán.

Pronounced here in Ireland as BOW (as in “wow”)-rahn (as in “gone”). I mention this because I find people have a difficult time knowing how to pronounce it. The Scottish also make use of this drum and pronounce it with a bit of roll on the “r” and emphasizing the second syllable rather than the first.

The drum is made of goatskin stretched over a frame, much like many African and middle-eastern frame drums. Here is where the similarity ends. Other frame drums are played flat and with both hands. The bodhrán is always played vertically, resting on the thigh of the sitting player (it is rarely played while standing as supporting the drum becomes difficult). One hand reaches behind the skin, pressing and moving against it to control tone and volume with the other hand strikes across the skin with a single stick, commonly called a “tipper” (although other names like “beater,” “bone,” “stick,” or the traditional “cipín” are sometimes used).

The tipper was traditionally made of knuckle bone, but now it’s usually carved from wood.

You will see painted bodhráns in every Irish tourist shop. They can vary from a novelty size of a few inches to 20inches across. The modern trend in professional bodhráns is a departure from the traditional wide, tacked, shallow frame with braces and moving toward a smaller-faced, double-skinned, brace-less, deep frame (sometimes close to a foot deep) with no external tacks and tuning mechanisms sunk into the wood inside the drum. Synthetic skins, alternative animal skins or goatskins not treated with lime (making for a softer, more pliable drum) are becoming popular as well.

The bodhrán is unique in that it is not struck directly, but dealt a glancing, bounced blow while the players wrist whips the tipper across the face of the drum much like a guitarist would strum his instrument. This method of playing lends itself well to triplets and swung duplets, common in traditional Irish 6/8 and 2/4 time signatures. The drum can hum and clatter, expressing a range of mellow, natural sounds. The bodhrán is not a sharp-sounding drum, it is mellow, earthy instrument with a deep voice and the ability almost to play a bassline when used by an adept player.

Here is a bodhrán duet myself and another player performed at this Bar Metro Session in Athlone last February.

Here is the awesome Athlonian duo Five Finger Discount performing a Scullian song with guitar and bodhrán in Flannery’s pub last Autumn. I’m including it because the bodhrán sounds particularly nice on this track.