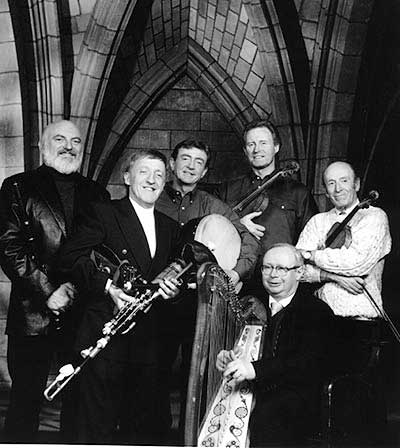 Among the English-speaking nations of the world, Ireland may be geographically small, but in terms of her impact on international music, she stands tall indeed. How is it that such a ridiculously disproportionate number of internationally famous musicians and bands call Ireland home?

What is it about this small, rain-soaked island that breeds such excellent music?

I’ve been exploring that vein of thought in this, the fourteenth in a series of profiles I’ve been doing on prominent Irish musical artists and groups.

This week’s artist is The Chieftains.

The Chieftains have been playing traditional Irish music since the 1960s and are certainly responsible for raising it’s profile around the world throughout their 40 years of playing and touring.

In their career The Chieftains have accumulated six grammies, an Oscar and an Emmy. They were the first band from the western world to perform on the Great Wall of China. Despite playing a genre of music classified as folk, The Chieftans have played with Pink Floyd, Chet Atkins, Elvis Costello, Nanci Griffith, Tom Jones, The Rolling Stones and Rod Stewart . . . just to name a few. Seriously, these guys have played with just about everybody.

I saw them perform in the San Francisco Opera House in 2001 with guest vocalist Joan Osborne. I recall the evening as a fantastic, entertaining concert. I saw them play the Cambridge Folk Festival in 2006 and, maybe because the sound wasn’t the best, maybe because I had been living in Ireland for years and had been indoctrinated with new Irish music (the likes of Lunasa, for example), I remember thinking they sounded a bit staid.

Despite that, these guys are legends. They must be the most well-known Irish traditional band in the world.