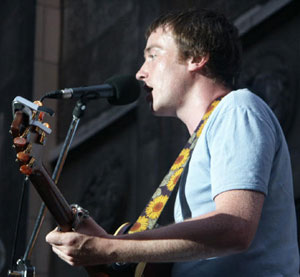 Ireland isn’t a big place. Nevertheless, Irish artists have always had a huge presence on the international charts.

More than that, Ireland and her music is often cited by songwriters and musicians worldwide as a musical influence and inspiration. What is it about this small, rain-soaked island that breeds such excellent music?

This is the fifth in a series of profiles irelandlogue is featuring on prominent Irish musical artists and groups.

This week’s artist is Pete Courtney.

I’m almost afraid to write this entry on Pete. I know you probably have never heard of him. Don’t worry, I hadn’t either before a couple of years ago when he passed through Athlone and played a jaw-droppingly good show for a tiny crowd of people who lapped up every second of his performance.

Pete has one album, One of those kids, which was released to universal acclaim back in 2001. It’s stunning, that album. Stirring, inspired, inventive and gorgeous – everything you’d want. Pete sings like he’s sitting next to you and and his guitar work is dextrous and dynamic. His live show included a bit where he used an old radio to tune in to various stations and play along live with whatever was being broadcast. He used a child’s xylophone at one point. I bought his album that night and am still, years later, trying to decide which song is my absolute favourite.

He was befriended at the time of the CDs release by radio and press who were ecstatic to see his star rise. After tangling briefly with the music industry, he headed off instead to India and Germany to play some small one-man shows for the craíc. Pete has also donated a lot of his time to workshops for children interested in music.

What do you say about someone whose music has everyone so impressed and whose actions describe a fascinating and compassionate personality?

Compelling I think is the word for Pete.

You should get his album and thank me later.