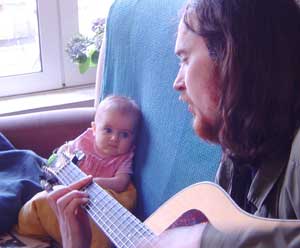 Ireland isn’t a big place. Nevertheless, Irish artists have always had a huge presence on the international charts. More than that, Ireland and her music is often cited by songwriters and musicians worldwide as a musical influence and inspiration. What is it about this small, rain-soaked island that breeds such excellent music? This is the seventeenth in this series.

This week’s artist is My Fallen Empire.

“Who?” you may be asking. Yes, it’s true – most of the other artists covered on the logue have been big name, or at least prolific, Irish artists. My Fallen Empire is an unsigned, sporadically performing 7-piece band that has yet to officially release any recordings (though several attempts have been made and the current one may still bear fruit). They’re also fronted by one of the best songwriter/performers I’ve ever met: Eddie Keenan.

Quick-witted, emotive, self-effacing, articulate and fiery – a dangerous man who writes one hell of a song. Melancholia and pop sensibilities wrestle fitfully throughout his works. The haunting refrains in his songs often strike the listener so compellingly that one is under the impression that this original artist is pulling his material from an extensive and obscure back catalog of half-forgotten songs.

This left-handed guitarist fronts a band so large you could split it in half and still have a couple of decent bands to work with. With any other group of players it couldn’t have worked out so well, but numerous though they are, My Fallen Empire is comprised of sensitive, adept musicians who somehow wrest a clean, rapturously textured sound out of what could be chaos. From velvety texture to raw, naked rock, this large band can sound like a stripped-down punk trio to an 24-piece orchestrated machine, depending on what the song calls for.

Veronica (cello/vocals), Neil (violin/vocals), Mike (bass/vocals), Taidg (electric guitar), Ross (acoustic guitar), Pete (drums) and Eddie (acoustic rhythm guitar/vocals) are an amazing band. Seven instrumentalists, five of which are songwriters themselves and four singing voices – My Fallen Empire is a stew of talent that most artists in the midlands will lend credence, if not downright admiration, to.

And, as luck would have it – they’re playing the Castle Rocks gig in Athlone next weekend.

Oh yeah – that’s Eddie in the picture playing guitar there for the munchkin some time last year.