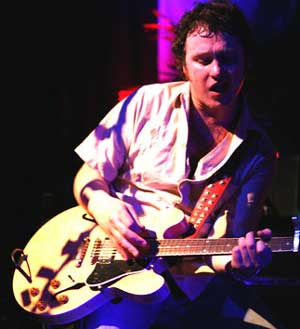 In about three hours, you can take a train across the entire width of Ireland. And yet, for such a small place, Ireland looms large on the world stage in terms of its music. Just count the number of Irish artists currently on the charts.

What is it about this small, rain-soaked island that breeds such excellent music?

It’s that very idea we’ll be exploring in this, the eighth in a series I’ve been publishing on Irish music.

This week’s artist is Mundy.

Mundy first came to international attention in 1995/6 when he toured with Alanis Morisette on her Jagged Little Pill tour. An auspicious beginning for the Sony-signed artist who was hailed at the time as “the Irish Michael Stipe” and “Neil Young meets Kurt Cobain.”

But following that first album it was clear that Mundy wasn’t the malleable young star Sony was looking for. Sony dropped him after hearing the recordings meant to be his second album. Rising from that huge corporate slap in the face, Mundy took the recordings and released the album on his own terms. The album, 24 Star Hotel, was even more successful than his first. The boys at Sony must have been smacking themselves in the collective forehead.

It’s this album that has made this man a part of the fabric of Irish music. Seriously, this guy’s songs are instant turn-the-radio-up-and-sing-along kind of things here in Ireland. “July” is a truly Irish pub anthem sure to get everyone singing along. “Gin and Tonic Sky” is another. His third album, a CD/DVD called Live & Confusion was released in mid-2006 and has already gone platinum.

The man himself is renown for being an approachable, likeable, regular guy. He still tends bar at his parent’s pub in County Offaly when he isn’t recording or touring.

You want a real slice of contemporary Irish music that hasn’t compromised for a wider international appeal, get your hands on one of Mundy’s CDs.