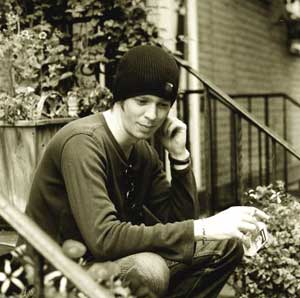 We’ll be exploring that vein of thought in this, the second in a series of profiles I’ll be doing on prominent Irish musical artists and groups. Maybe, by putting these amazing people together here in this series we’ll shed more light on what makes Ireland such a great place to be for anyone interested in music.

This week’s artist is Mic Christopher.

Never heard of him? Unfortunately, Mic Christopher died in 2001 just as his solo star was beginning to rise. He was on tour with The Waterboys in Holland when he slipped on some stairs and died from head injuries. Exactly a year after his death, the album he was recording, Skylarkin’ was finished and released by his friends and musical collaborators and went platinum within two years.

The first track from the album, Heyday was used in the famous Guinness commercial, The Quarrel, wherein a man swims from Ireland to New York to settle a personal issue.

Mic is revered and deeply missed by the community of Irish musicians he associated with. He played in a band called The Mary Janes until 1999, when they broke up and Mic embarked on his solo career. Dublin band, The Frames have dedicated every album to Mic since his death and continue to play some of his songs at their concerts.

Below is a great live video of Mic playing Heyday at the Spirit Store in Dublin.