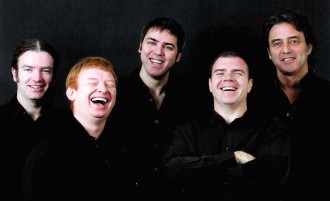 It may be a diminutive aspect of Europe’s geography with a population barely topping four million, but Ireland has a ridiculously disproportionate number of internationally famous musicians and bands. What is it about this small, rain-soaked island that breeds such excellent music?
This is the third in a series of profiles I’m doing on prominent Irish musical artists and groups.

This week’s artist is the group Lunasa.

Never heard of them? If you’re not into traditional or folk music I suppose it’s not surprising. How and ever, if you’re into traditional Irish music at all and you haven’t been under a rock for the last ten years, you most assuredly have.

Don’t like the diddly-dye Irish music? Wonder what the big deal is? Lunasa may be the band you need to hear about.

For those uninitiated with Irish music, it can sound like a forever spooling tune that repeats over and over and yet still seems to lack any kind of discernable structure. This impression may be caused by the emphasis in traditional Irish music placed on melody. In the worst sessions, traditional Irish tunes can ramble on without any concern for tempo or rhythm.

This is where Lunasa definitely departs from other Irish music.

While rich with lyrical melodies, Lunasa’s music is a love affair with rhythm. The presence of the stand-up bass in their musical lineup really nails this home; this stuff grooves. Their music jolts and starts, bringing the fantastic Irish rhythmic patterns out from the background and right up front with the melody. Toe-tapping, energetic and unconventional, Lunasa eschews what has been done before and plays this stuff like they’ve only just discovered it. It’s fantastic. Their albums are universally critically acclaimed and, from their first release in 1997, the band has been the focus of a breathlessly enthusiastic following around the world.

Compelling and unusual, Lunasa is a piece of the thriving soul of what Irish music is doing right today.