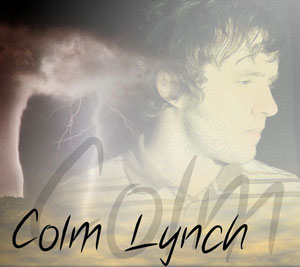 It’s that vein of thought I’ve been exploring in this, a series of profiles on prominent Irish musical artists and groups. Ireland is a great place to be for anyone interested in music and this is the tenth in this series.

This week’s artist is Colm Lynch.

We first became aware of Colm Lynch in an unusual way. We were down in Sin E in Dublin to play a support show for the On The Verge compilation CD (which Colm and ourselves had been included on). We were scheduled to play the headline slot of the night but, having recently become parents, were eager to get back before it got too late (being our first night away from the munchkin, we were a little anxious about leaving her). When told of our plight, Mr Lynch came over to our table and, in his quiet manner, graciously offered to swap slots with us.

As if that wasn’t enough, he approached us after we’d played and asked for a copy of our CD (he even tried to pay for it) to pass along to the Ruby Sessions folks – he liked our performance and wanted to tell them about it.

After such an introduction, we were, of course, predisposed to like him. We felt the least we could do would be to stick around and catch his first song before leaving. But after 30 seconds of him taking the stage, all thoughts of missing the rest of his set left us.

Aside from being an incredibly decent human being, Colm is a captivating live performer with fantastic songs. Machine-gun percussive playing accompanies unusual lyrical content and a vivid stage presence. Watch the right hand, folks – whip quick! Here in Ireland, the “singer-songwriter” moniker burdens many. If Colm gets slotted under it, it’s not because he fits the genre, but simply because he often plays on his own. This Dublin musician makes no apologies for bringing the ROCK to his one-man show; an inclination that is more than apparent on his fully orchestrated album.

Discussing his performance on the drive home, we had no idea his was a rising star. A few weeks later we heard that his CD release party was a sold-out show in Vicar Street. Right on! His mug was recently to be found looking out from the cover of Hotpress, who enthused about him effusively – and rightfully so.

Now go buy his album before everyone else is telling you how great it is.