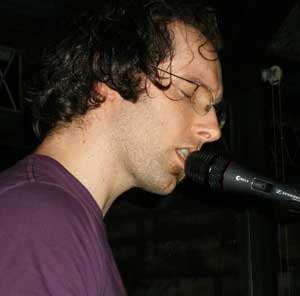 Called the land of saints and scholars, Ireland also has cradled a huge number of poets and songsmiths in her emerald arms. Even today, Ireland produces ridiculously disproportionate number of internationally famous musicians and bands given its diminutive size. What is it about this small, rain-soaked island that breeds such excellent music?

This is the thirteenth in a series of profiles I’m doing on noteable Irish musical artists and groups. It’s my intent to shed more light on what makes Ireland such a great place to be for anyone interested in music.

This week’s artist is Bill Coleman.

Originally from Cobh, County Cork, Bill is no stranger to this blog. He played the Shack in Athlone recently and we shared a stage with him at The Roisin Dubh last fall.

Bill is great. Seriously. It’s hard to effuse objectively about an artist one knows well, but I am one of a huge number of folks with praise for him and his music. After years of touring (Bill features regularly at The Ruby Sessions, Dublin’s Hard Working Class Heroes festival and at venues all around Ireland), he finally released his album, I’ll tear my own walls down last week and has been appearing on major Irish radio stations across the country in its wake.

I first got to know Bill through his song, Fight No More, a poignant, modern anti-war anthem. A bunch of the lads used to play it – for a while it was always the last song played a local sessions out here. What a great song. You should click here and buy the EP it’s on.

Anyway, Bill then played the 2005 songwriter night here in Athlone and, quite frankly, blew the room away on the night. You can pick that cd up here. Bill is the kind of guy who will be passing through town, so he’ll give you a ring and join you for a pint in Sean’s Bar. Being Sean’s bar, there’s bound to be some music on and someone will shove a guitar into his hands and convince him to sing a song which will put the whole beer garden into stunned silence. Seriously, this has happened more than once.

His live shows are something to behold. Bill is always a passionate performer, but he pushes himself live to try different things with his music, whether it’s effects pedals giving his one man show sudden 5-part vocal accompanyment or looping some guitar harmonics backwards to give a song some percussion – Bill is an inventive, richly talented performer with one hell of a voice. He’s one of those guys that doesn’t really need the microphone, you know?

In any case, you should definitely buy his album now before all your friends are telling you about this amazing guy they just found out about.

And here’s Bill singing one of his songs translated into Irish. That wacky guy . . .