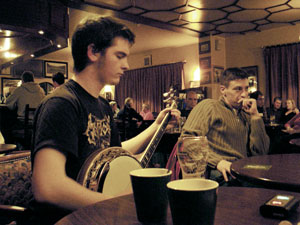 It’s been a good week for music, folks. What withBar Metro on the Monday, The Shack on the Tuesday and now out to the Green Olive this Wednesday.

Being Ash Wednesday I wasn’t sure the session would have much of a crowd but I supposed I needn’t have worried. Milo and teacher showed up shortly after I arrived along with a fella on banjo I hadn’t met before.

These players are all veteran players and the evening was replete with musical in-jokes and attempts to throw each other off the tempo. I was well impressed with our banjo on the night as he nimbly stepped through arpeggios that would have tripped up a lesser player. Check out this sample of banjo virtuosity. Allllright!