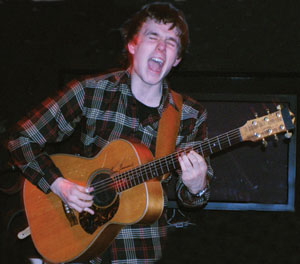 So there it was, Valentine’s Day and wifey a couple of thousand miles away.

Not to fear, faithful readers, I was there, pint in hand, in good company among the other bachelors at the Gareth Pearson concert in the Palace Loft.

Gareth Pearson? You may ask. You may. Let me put it this way: 17 years of age, Tommy Emmanuel’s signature there just above the soundhole, Gareth hails from Wales (I’ve always wanted to say that) and can reach into his bag of tricks for anything from Chet Atkins to Leo Kottke and all your Jerry Reed in between.

Did I mention he writes his own stuff as well? For feck’s sake, folks, the word is “prodigy.” Everyone is probably asking “What’s this kid going to be like in 20 years if he’s playing like this now?” I think that’s missing the point.

This is a young fella who, after four years of playing, is able to do the kind of things guitar players who have been playing for decades will never be able to do. How cool is that? What kind of things do other kids his age do for a rush? I’ll tell you – look at that face there (I hope Gareth won’t kill me for posting that pic, but I love it): he’s plugged into a lightning rod. All the spit, fire and uncertainty of a teenager stepping agile through tunes just aching for that kind of youthful vigor. If being able to play things like this keeps guys like Tommy Emmanuel young, imagine the thrill of seeing a kid get to do it. It’s a complete Adrenaline Rush.

As a guitar player myself, I know how hard it is to afford a really good guitar. Can I take this moment to suggest that maybe a decent guitar company might want to showcase their product under the adept fingers of this superlative player? Imagine the exposure. You could be seeing a respectable guitar maker’s name up there in the picture . . . really a shame it hasn’t happened yet . . .

Fair play to the Athlone Folk Club for another triumphant concert. I really wish I’d brought a video camera so you can see for yourself, but you’ll have to be satisfied with this video: