So this evening I headed out to Flannery’s for the Saturday session. The roads were wet with rain and the streets were full of celebratory Junior Certs in search of The Pub That Does Not Check For ID. I met a friend for a couple before heading across town with the bodhrán in search of music. I was greeted at the doorway with the news that Flannery’s was hosting an end of summer party.

“In September?” I asked. The answer was the same.

Flannery’s is one of those pubs that most people miss. In the old style, the family that owns the pub live right behind it (from the right angle, you can see the kitchen of their home through the door behind the bar). Because Flannery’s strives neither to appeal to the crowds of young drinkers nor to the pensioners who make drinking a part of their daily routine, it has managed to preserve the quiet, cozy ambiance of a pub in a much smaller town from days past.

Open only one or two days of the week, it’s rare to find the door open. 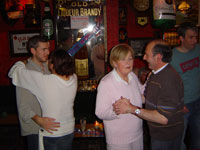 Inside, the place is wedged. I dodge a couple waltzing to the music and locate a seat at the bar next to a friend. The bartender catches my eye and nods toward the Guinness tap – my pint is on the way.

Flannery’s shelves are literally overflowing with knick-knacks from acround the world. Faded drink advertisements from bygone days are scattered throughout. The lighting is a dim gold, casting a forgiving light on the worn surfaces. The huge set of horns from Africa mounted in the shadows to a ceramic mug from Yosemite amongst the clutter behind the bar, testify that Flannery’s has seen a lot of visitors over its lifetime. It’s an older generation (mostly) here in Flannery’s. While in the jax I overheard two men saying,

“There’s no more places like this, sure there’s not.”

“Ah, what will we do when this is gone?”

“Won’t we be gone ourselves?” 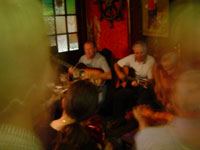 Back into the bar, a white-haired man with a big, raspy voice sings a older, humorous song I’ve never heard before about the winning the Irish Lottery (2min 40 sec in length). The accordian picks up the tune. At the chorus, the crowd joins in. It seems there are more women than men tonight, an arrangement that seems to suit all concerned. I’ve never seen any tourists in this pub, I suppose most walk right past without even realizing the pub is there. My pint arrives. A fella I’ve seen before stands. His hair is in a pony tail and he wears tinted glasses that obscure his eyes. He begins a routine of locally-tinged jokes (7min 19sec in legnth) that soon has the crowd in stitches.

At length, things wind to a close and the crowd drifts out the door in ones and two, calling their goodbyes. I make my way across town, through the throngs of people coalescing outside the night clubs and back across the bridge toward home. 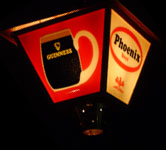 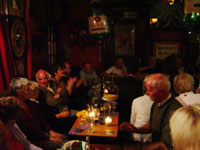