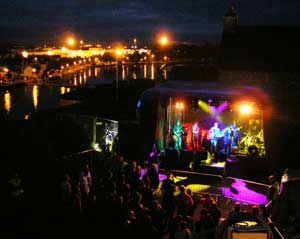 I know it’s a bit dark, but look at that photo there to the left – the lit stage, the lights shining on the river Shannon below – what an awesome venue for a concert.

Yesterday I got a phone call to drop by after work and lend a hand and a few bits of equipment in the castle courtyard. When I arrived, the stage was erected but lighting and sound crews were still hard at work. Worse, the opening band passed me on my way in, not having played a note. “A coupla the lads have a gig in the Palace at 10 – we gotta go,” they explained. 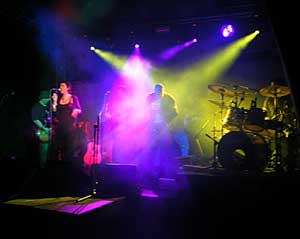 Within short order I was somehow appointed the stage manager and, after a few minutes of confusion, realised the musicians were asking me so many questions about their own amps because the amps weren’t actually theirs – they were on loan from a band playing tomorrow night.

In short, it was chaos.

Yes, it could have gone very wrong for Filmore East, they were not the band the crowd was expecting and things were off to a late, disorganised start . . . but the good news is as the sun set and lights came up, the band ripped into their set of gritty blues numbers while under the stars in the castle courtyard the crowd cracked open their cans of beer and everyone realised what a great thing an outdoor concert in the castle is.

At the end of the day, good music wins through. Have a listen for yourself.