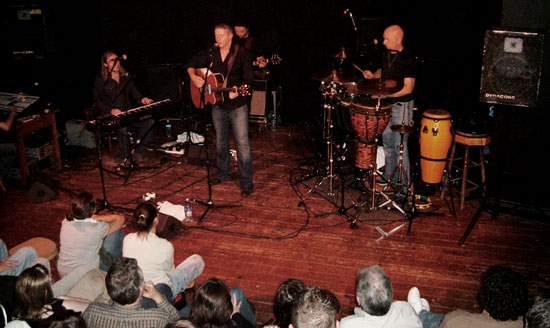 Damien Dempsey is the kind of guy you see headlining at major festivals. He has a big, husky Dublin-drenched voice that functions with such power it makes you wonder if he actually needs a microphone. He’s reknown for his politically-driven material and his cross-genre songs that borrow heavily from the traditions of reggae, rock, Irish traditional and even hip-hop.

In short, he’s a bit larger than life.

So, there I was, sitting on the floor five feet away from him, his voice booming through MY SPEAKERS as he played the tiny 60-seat Bog Lane theatre in Ballymahon. Way cool.

Mike Bartlett, his guitar tech, opened the show. Mike is back playing music after 15 years working tech in the industry and is an impressive fella in his own right, standing well over 6 feet, arms sheathed in tattoos and with a voice that would do Freddy White proud. Rock on.

It would have been handy for Damien Dempsey to come on after Mike’s opening on his own and play an acoustic set. After all, in such a small venue it would be easy to overpower the people sitting just a few feet away from you. His setup included a keyboard player (who picked up the flute & Irish whistle once or twice), and electric guitarist (who played mandolin on a few songs) and a percussionist who drove the concert along standing among a forest of djembe drums, cymbals and even a bodhrán. They all sang. They all played with finesse. It could, quite easily, have been way too much. It wasn’t. It was perfect.

Damien played that little venue like it was a fully packed stadium. He talked and joked with the audience and it was evident that his decision to play tiny venues like this across Ireland follows his overall grassroots perspective (some would call him crass or vulgar at times). He congratulated the audience on having a fabulous, approachable venue like The Bog Lane Theatre in their village and encouraged them to value it and make use of it; fill it with music and culture. Having a big star like Damien come to town and play the Bog Lane is just huge.

For those new to Damien Dempsey and his music, here’s a sample of lyrics from a song he performed last night. It’s one of his more inflamed political pieces and is called Colony:

I look to the east, I look to the west
To the north and the south, and I’m not too impressed
Time after time
After crime after crime
They raped, robbed, pillaged, enslaved and murdered
Jesus Christ was their god and they done it in his name
So he could take the blame if it’s not all a game

With bible in one hand and a sword in the other
They came to purify my land of my Gaelic Irish mothers
And fathers, and sisters and brothers
With our own ancient customs, laws, music, art
Way of life and culture
Tribal in structure
We had a civilisation
When they were still neanderthal nations.

We suffer with the Native American, the Indian in Asia
Aboriginal Australia
The African people with their history so deep
And our children still weep and our lives are still cheap
You came from Germany, from France, from England
And from Spain
From Belgium, Holland, Portugal
You all done much the same.

You took what was not yours
Went against your own bible
You broke your own laws
Just to out do the rival
But did you ever apologize
For the hundreds and millions of lives
You destroyed and terrorised
Or have you never realized
Did you never feel shame
For what was done in your country’s name
And find out who’s to blame and why they were so inhumane?