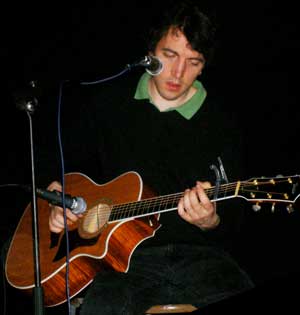 I must be just about the only person in Ireland who didn’t know who David Kitt was. At least, I was until last Wednesday when he played two shows in Ballymahon, the first solo in The Bog Lane and the second with more instruments in Cooney’s Hotel.

I was there as a sound tech and really, having no idea who David Kitt was, had absolutely no idea what to expect. I did run into him in the jax while we were setting up and he seemed a quiet, affable sort of guy. An hour or so later I encountered the zeal and excitement of the folks waiting outside for the two sold-out concerts. Robert Blake opened in the Bog Lane with his dynamic, energetic performance. Primed from the fabulous opener, I was eager to see what Kitt was like.

Kitt got up onstage. Immediately everyone leaned forward – but it wasn’t just anticipation . . . Kitt speaks VERY softly. Especially after Blake’s strong, mic-less performance, Kitt seemed like he was almost whispering. His very capable sound engineer quickly managed the necessary push for his vocals so we could hear him sing. But even with the mic it was often difficult to hear him during his in-between banter. The fella next to me asked me twice, “what’d he just say?”

Folks, the room was warm. Every one of Kitt’s songs vacillated from slow to mid-tempo and lasted no less than 6 minutes each. Also, he really was very quiet, almost somber . . . it reminded me of how I play when trying to lull the munchkin to sleep. It didn’t help that I was, of course, completely unfamiliar with any of the songs. He kept murmuring these drawn-out, slow tempo, tentative, quiet songs for close to two hours.

Thing is, he was very likeable. He was funny and candid – I just couldn’t keep my mind from wandering during his performance and then . . . I’d start awake at the applause. There were some catchy bits, he mentioned that he’d been wanting to do an acoustic version of his song Don’t Fuck with Me, and after he played it I began to wonder what the band version was like.

I didn’t have long to wait, Kitt was informed, to his slight annoyance, that the opening band in Cooney’s hotel had finished some time earlier and the second crowd was waiting for him. “Why didn’t someone say something to me?”He rushed over to the second show where a packed room stood waiting.

The second show was, in fairness, a departure from the first. I was surprised, however, about the instruments Kitt decided to utilise for his live show: a trumpet player and a keyboardist. Plugging in an iPod, the three musicians onstage proceded to play along with pre-recorded drums, bass, guitars and other studio instruments.

It sounded pretty good (his sound engineer WAS top class), but I felt funny watching these guys rock out to pre-recorded tracks. Robert Blake came over to me and said something that really stuck with me:

The crowd, however, seemed to be devoted to Kitt’s music and encouraged an encore when he’d finished. He even played the non-acoustic verson of Don’t Fuck with Me that I’d been curious to hear.

Talking to some avid fans following the concert, it would seem that I really need to have a listen to his first album which has been described to me as “one of the best things ever.” The sad thing is that Kitt was dropped from his record label recently and is making a go of it on his own – sounds like one of those typical music industry scenarios where labels treat an artist right only while he’s creating music that appeals to the lowest common denominator. It’s good to see someone who, despite a flirt with fame, is not afraid to get out there in its wake and play some smaller venues for people who really appreciate what he does.