Last night was the fabulous Brideswell traditional Irish music session. This session is, quite possibly, the best traditional session in the midlands.

I almost didn’t go, but then I reflected that it had been some weeks since I last attended. It was a wet drive out under the overhanging trees to Brideswell. The village of Brideswell in County Roscommon is a very small place off the Tuam road from Athlone. Ronan, the Bean (our driver) and Anne-Marie joked about the two pubs in Brideswell: O’Connell’s and Hamrocks.

“You’re either a Hamrocks or an O’Connell’s man, and there’s no in-between,” the Bean asserted, “It’s a bit like being protestant or Catholic.”

Hamrocks is the larger and newer of the two, attracting a more youthful, hip clientelle. O’Connell’s is, as Bean puts it, “an old man’s pub,” and is hosts the trad session every fortnight. 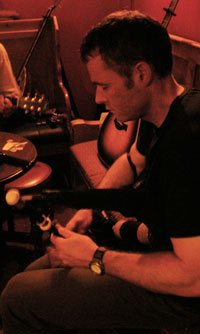 One of truly fabulous things about Brideswell is the instruments used. Most trad sessions would have a guitar, maybe a whistle, banjo or mandolin and often *shudder* an accordian. The Brideswell session has rotating members, but the core group would consist of a guitar, bouzouki and, most unusually, Uilleann (pronounced “ILL-ehn”) pipes. Flutes, bodhráns and whistles are frequently in attendence as well (as is the occasional accordian, usually to the chagrin of the core group), but the main instruments create a lovely dynamic that never becomes overbearing. To go along with the unusual instruments, the group will often play progressive traditional music with arrangements from the likes of Lunasa, Dervish and Planxty.

I managed a few recordings this week, but this one is a good example of the sort of unusual tunes you might hear.

The staff is quiet and friendly and the clientelle usually sit in confidential groups, laughing at some bit of humour or another. When the right song comes on, that little pub goes dead silent. Unfortunately, I have to admit I was a bit under the weather this week and was glad when we were tucked back into our car heading home.