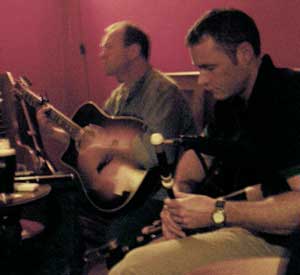 This must be some kind of weekday record for sessions. Bar Metro Monday, Shack Session Tuesday and Green Olive Wednesday . . . it would have to be the fortnight marking the bi-monthly Thursday session in Brideswell, wouldn’t it? I tell ya kids, all the chips are falling into place.

Brideswell is always a good session. Piper commented that the lads would have to learn some new tunes,

“You must have them all by now,” says he, eyeing my digital recorder.

It’s not the tunes lads, but how they’re played that counts! We had an unexpected cota to our evening when ze germanz neighbour pulled out a box and showed himself to be a very able player – fair play to him. I’ll tell ya, what with all the ability shown in GAA matters lately and now spontaneous accordian wizardry – there must be something in the water out around St Brigids.

There was plenty of the usual quality ceoil (I love the guitar on that one there) and even a singer chiming in at one point.