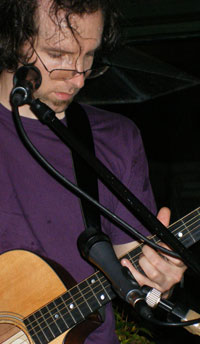 I seem to be turning into a sound engineer.

For the second time in recent months I found myself on the opposite end of performance, working the desk at Bill Coleman’s show in the Shack this past Saturday night. To be honest, it’s a nice for a change not to worry about having to perform; it’s gratifying to be in a position where I’m in charge of making a performace better rather than making a performance.

It was a close call nonetheless (I just love that word), we had left Kinsale later than planned that afternoon and I honestly wondered whether we were going to make it to Athlone in time. More frighteningly, I had some doubts if I was going to be physically able to get everything packed, moved, set up and ready on time.

I suppose I needn’t have worried. Bill and the Bean gave me a hand loading up the aul car and I even had a chance to shovel a mouthful of pasta in the mouth before heading over.

The event itself was well-attended and I was pleased to see that the relaxed atmosphere cushioned what turned out to be a great show. Ian Munt, a local English ex-pat, started things off with some melodic treasures. I really admire the way he strings chords along his melodies, its not something today’s emo rockers do much; everyone seems to be trying to get the music out of the way in order to communicate. Ian’s stuff certainly has substance, is often playful, but makes no apologies for being abashedly musical. 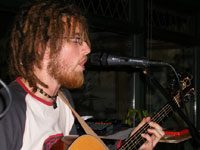 The Bean played next and I have to say his new stuff is fantastic. I found myself singing a few of his tunes later that night. Anne-Marie joined him for the last few tunes and it was nice to see he’s found someone as passionate about music as he is himself. He may have been too nervous to notice, but the audience was really with him during his set.

Finally Bill took the stage. I have a lot of admiration for the way he keeps pushing his show in different directions. Two years ago when he played the Midland Songwriter Showcase he recorded some harmonics through a delay pedal and reversed the sound to act as a musical percussive track during one song. This time he had set himself up not just with his acoustic guitar, but with a rainbow of effects pedals, a keyboard/drum machine, an electric guitar, secondary microphone and auxilliary amplifier.

He vassellated between the instruments throughout. At a couple of points during the show he would lean down to the second mic to sample himself singing, then he’d sample himself harmonising to that first sample, harmonise again to the previous two and then, to a background of repeated three-part harmony, he would sing a counter-melody through the main microphone. Pretty agile stuff.

Athlone is pretty familiar with Bill’s stuff and there was a lot of singing along to his tunes.

As I was running on fumes I tore down and bowed out of the afters to call it an early (if you can call 2am early) night.