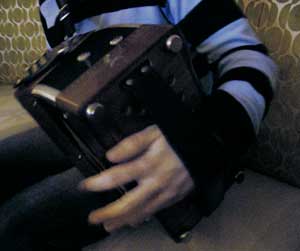 The munchkin caught a cold. Daddy diligently wiped that little nose and soothed the upset little girl when she was cranky.

Ah, hell. So, with a cold coming on strong, on the worst day of the week – paper deadline – the day I sometimes get home around 1am I was asked to sit in on the goatskin at the Bar Metro trad session.

And I ask you, friend, what was a fella to do?

Well, of course I made arrangements with the production manager to skee-daddle early and at 10pm, there I was leaning into the aul bodhran to tunes like this one.

A spartan set-up, with just the box player, milo and me own sweet self we made do well enough to get those old fellas at the bar hopping out of their seats occasionally.

As the only singer of the trio, I was obligated to play a couple of songs during the evening. This is one thing I’m always hesitant to do because my repertoire of Irish music is severely lacking. I’ll need to remedy that, methinks. One thing I’ve noticed when playing with an accordian player is that the tunes tend to go on for twice as long as with other instruments. I’m not sure why this is, but it makes it awfully hard to put recordings up when the pieces are so long the files won’t load. grrr…