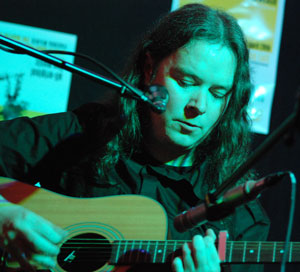 So everyone wants to know how the songwriter night went. I believe the evening was a great success. Here’s what my day was like:

6am: the munchkin is awake early and her cries sound . . . different. As I lift her from the cot I can’t help but notice she feels hot to the touch. A quick thermometer reading later – sure enough, she has a 102-degree temperature. The poor little thing just about inhales a sippy cup of apple juice and then gives way to some listless cuddling – not at all like her normally active self.

The next couple of hours are spent on the phone with the nurse and contemplating the munchkin’s behavior to determine whether this particular illness requires medical intervention. Some packing and preparation for the concert occurs.

10am: Breakfast of sausage and eggs. Text messages go out to ze germanz about setting up.

11am: ze germanz, bean and I shlep the gear up three flights of stairs and run innumerable leads. This year we realise that our largest act needs 16 channels of audio from the stage. “Did you not tell them this is an acoustic show?” ze germanz ask. “This IS their acoustic set-up,” I reply. “It will be easiest if they go last,” he advises. We usually draw names from a hat for the order of acts, but ze germanz have a point.

12.30pm: With stage set up, sound-proofing hung and equipment mostly in place, the bean takes his helpful self off to administer the Sunday session in Sean’s to the hungry masses. Go, man, go.

Ze germanz and I start running leads and setting up mics.

2pm: Ze germanz head home to make some more giant leads. I head back to the house where I anticipate some rest. A smiling Jimi Cullen appears and joins us for some tea. The midwife and friend arrive and volunteer to assist in decorating.

3pm: A short visit to the Sean’s session in hopes the music will cheer the munchkin. Munchkin is not cheered. We leave after a few minutes.

4pm: I collect cameras, candles, posters, CDs, t-shirts and whatnot and begin the migration to the loft.

4.30pm: The acts show up and the Martin Staunton Band begins to set up. Their drummer’s small kick/snare/hiHat combo turns out to be a large kick/snare/hiHat/lowTom/rideCymbal/4-other-cymbals-as-well combo. Ze germanz shoot me a look. “We all going to fit on here?” asks one of the band members. “Ahhh, ye’ll be fine.” I reassure them. Their secondary keyboardist arrives and surveys the madness.

5pm: The Martin Staunton Band does not want to play last. In fact, they want to play first. In fact, they insist on playing first. I explain that, as the largest act (the other acts are solos and a duo), it would be the most sensible and courteous thing to volunteer for the headline spot. This does not go over well. “If you had just told us in advance!” one desperately insists. “Told you what in advance?” I ask. “That we wouldn’t be going first!” They say. “Ah.” I reply.

The midwife and her friend stick posters everywhere and arrange candles – God bless Germany and all spawned of that place.

6.30pm: The Martin Staunton Band is set up and will be going first. Ze germanz lean over to me “We should have sound-checked them last if they are going first.” I shoot him a nasty look. The other acts have drawn names from a hat and selected their own running order. They are now waiting for their sound-check. The Martin Staunton Band strikes up a song for sound check – everything sounds fantastic. I feel a small part of me relax: it’s all going to be okay.

7pm: I walk the Martin Staunton Band back to the flat where a bbq awaits. Martin himself is apologetic about the running order issue “Some of the lads have to work in the morning and driving all the way back to Dublin . . . “ I tell him it’s fine – the band playing first is actually a great way to start off the night with a bang.

We arrive at the flat and I begin to cook burgers and hot dogs, first pointing the band toward the beer chilling on the balcony and snacks, including wifey’s home-made quacamole, on the kitchen table. “Holy shit – this is amazing” one of them says after his first mouthfull of wifey’s guac. Alll riiight.

“Wow, we’ve never actually been FED before a show,” one of the band members comments.

8pm: This is the first year we’ve actually managed not to be setting up right before the evening began. The whole bbq idea – I didn’t think it would actually come to pass. People are watching Sesame Street in the living room. Smokers and outdoorsy types are eating on the balcony. The kitchen is full of folks discussing a holiday in San Francisco. The last of the acts show up from their sound-check and look around for something to eat.

Siameasy, the evening’s MC shows up. “So, do I know any of these people who are playing?” he asks, huge factitious grin spitting his face wide.

8.30pm:The midwife and I run around the dark performance room, lighting candles, laying CDs and tShirts out at the door and moving tables around. Bitch shows up with a second video camera and some lights.

9pm: Only a few people have shown up so far. “Sure, you tell people 9, they’ll be here at 10” someone says. Truer words were never spoken. 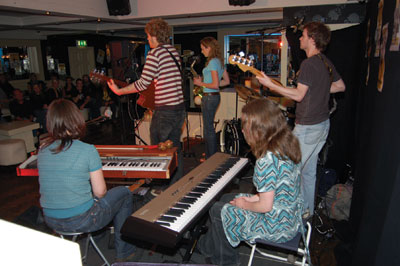 9.45pm: The room is mostly full and I tell the band to get started. Siameasy takes the stage, “Welcome to the Midland Songwriter Night . . . “

11.45pm: Declan Fineran, the final act, finishes to rousing applause. I set down and switch off the video camera I’ve been carefully operating from a kneeling position at the foot of the stage most of the night. The performances have all been top class, as the mostly silent audience throughout the night testified to.

A couple of folks come over and shake my hand, telling me they enjoyed the evening. Ze germanz and a few friends are already disassembling the stage as folks finish their drinks and coalesce into chatting groups. A great weariness seizes me, but I make the rounds, thanking the acts for coming and sharing with them my appreciation of their craft. El Rob-o brings me a frosty pint of stout.

3am: The concert is over, the Palace is closed, the gear is torn down. Wifey and I are sitting with el Rob-o in the kitchen and I cannot resist making a quick hamburger from what is left in the fridge from the day’s BBQ. I also can’t seem to stop eating siameasy’s fiancee’s cheese dip. Tomorrow is an early start for work – 9am.

Another year of the midland songwriter showcase has come and gone. I’ll be framing this year’s concert poster to hang up on the wall next to the other three tomorrow.