Things to Do in Dublin 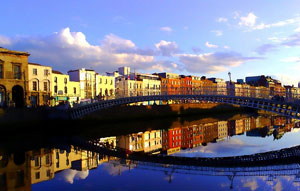 Dublin is known as a remarkable place for a getaway. Going there is so easy. You may get a flight direct to Dublin or just take a bus trip. You could even take a ferry in order to get to the city of Dublin. You can also experience there the fantastic countryside, coastline and even the mountains. There are truly a lot of things that you can do while in this capital city of Ireland.

Guinness Storehouse is located at the center of St. James’s Gate Brewery. A sightsee of the seven-floor Guinness homage, bordered with a glass atrium getting the shape of a pint glass. On its first floor, the immense display introduces visitors to the four components barley, hops, yeast and water, all are mixed together to create a Guinness pint. Tourists are introduced as well to the fifth and the most important component- to Arthur Guinness himself.

As tourists continue the trip to the whole building, their next encounter would be the display of the Guinness advertising history and this include watching of the many famous television ads from the past years.

The last floor of the building is intended to the Gravity Bar, which forms the giant pint’s head of Guinness. The Gravity Bar provides an area to relax, enjoy a free pint of Guinness in addition to being mesmerize with the 360 degrees spectacle of Dublin.

>>read more about the Guinness Storehouse

If you are looking forward to a more cultural day or if you simply want to scare your children a bit, try to go to St. Michan’s Church. The vault of the church has preserved bodies that include a nun, a six-foot six crusader and strangely, a body with its feet and arms detached. The church was first constructed in 1095 but it nowadays mainly consists of the rebuild in 1686. The church is indeed well worth of your visit especially if you are in search of a bit history without actually making the rest of your family boring.

Located on the south part of the River Liffey, the Temple Bar is a hip location set in a historical spot with tight streets that are still cobble rocked. These days, Temple Bar is connected with the Saturday Market, stag, culture, hen parties and nights out. For younger individuals visiting the city, the Temple Bar is basically the first in their itinerary.

In the past, Temple Bar truly diverse as in the last century the location was extremely ramshackle. At one part in the 1980s the location was almost transformed into a bus station. In contrary to this projected improvement on the request of the residents and merchants, the government established a non profit business in the year 1991 to defend such special location.

Croke Park is considered as one of the biggest stadium in the entire continent of Europe. It also serves as the headquarters to the Gaelic Athletic Association, thus making it a must see during your tour. Annually, it plays host to the Gaelic Football finals and Hurling championships, and serves as a home to the GAA Museum. This location is also a must to visit specifically if you are involved in sports or with the culture of Ireland.

Located in the hub of Dublin; Trinity College is the most popular educational institute in Ireland. Travelers from different parts of the world come to witness the quaint cobbled courtyards as well as the Old Library, which contained the Book of Kells, an elucidated manuscript that contains the New Testament’s four gospels. Also, the former students of Trinity College include Oscar Wilde and Samuel Beckett, so you are secured in the facts that sensible individual than you have followed your footsteps.

If you are searching for a part of Dublin that is not in the weekend travel brochure, then go to George’s Street Arcade. Enclosed in a solid Victorian structure, the George’s Street Arcade is a market of shops and stall to accommodate the other bohemian part of your character. But if you think you don’t have that bohemian part, then go to the George’s Street and surely you will be soon. Totally original souvenir, exotic jewelry and fine wines all make an exciting day shopping, with a variety of cafes letting you to sit and absorb the views from the hip to the completely bizarre as your legs starts to feel tired.

The leading shopping interest in Dublin, Grafton Street is a walker only lane and extends from the College Green all the way to St Stephen’s Green. The street was deemed as one of the finest streets in the country, if not in the entire Europe.

>>read more about Attractions in Dublin