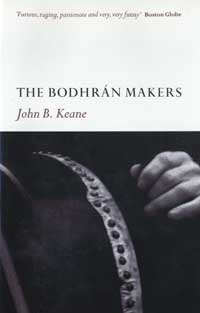 In my last Irish book review, I commented that I was going to give the Irish novel a go – that I would attempt to familiarise myself with the workingman’s novel in Ireland. To this end, I picked up The Bodhran Makers by John B Keane.

Make no mistake, this is fiction, not a book on making Irish drums. In fact, the making of a drum is featured at one point, but only one of the characters is actually a manufacturer of bodhrans.

Colloquial, funny and colourful, The Bodhran Makers paints a loving, humourous portrait of the inhabitants surrounding a small Irish town and how their loves, religion and way of life provide for the unexpected twists of circumstance that make this novel so worthwhile.

Revolving mostly around a bitter church figure determined on squashing the fun out of life in the town and a determined band of rural farmers in search of a bit of craic to make their poverty-stricken existence more worthwhile, Keane’s novel goes to great lengths to affectionately portray each character and breathe a believable life into him and her.

From salty Bluenose, the old man full of stories, to Patsy Oriel, a man gifted with the ability to sweep any woman from a dance floor and onto her back, this account of the inhabitants of Dirrabeg in the 1960s is well worth a read. It also serves as a vivid record of certain Irish ways of life that have gone the way of the dodo. Aside from describing the old method of making drums at one point, the novel illustrates many lost Irish ways of life, including the annual wren dance as it was maintained earlier this century in Ireland.