Sushi in Ireland, a dó! 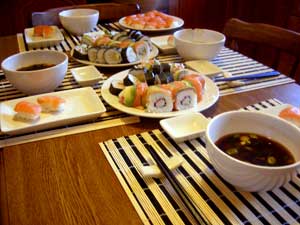 What you see there is the proud new table setting last Wednesday before we all tucked into some scrumptious sushi. The cause of the swanky table setting is the arrival of sushi place settings in our local Lidl (just €7!). Ever since our first attempt at sushi we have been heartened and make the attempt at least once a month.

This time around it wasn’t just proper sushi plates, chopstick rests & soy sauce boats that made the difference, but Guy Noir made some miso soup from scratch and (insert sound of trumpets) we have managed to locate seaweed (nori)!! 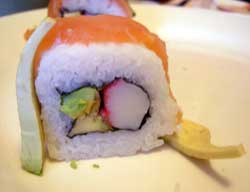 As fate would have it though, the day before our sushi night Tesco in Athlone started carrying sushi ingredients! This WOULD happen right after we combed the internet and ordered loads of stuff in bulk. *sigh*

Funny enough, we have found the Tesco “sushi rice” to be a little inferior to our home-made blend of their “Thai” and “Paella” rices for the purpose of sticky, roll-able sushi rice.

In any case, it must have been a cosmic occasion because one of wifey’s delicious dragon rolls appeared in 2.0 format. Seriously, look at that picture and tell me you don’t see the number “20” there.

Okay, so it’s not the face of the Virgin Mary in corn flakes but hey – it’s gotta mean something, right?