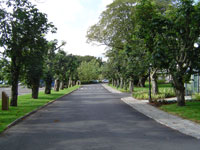 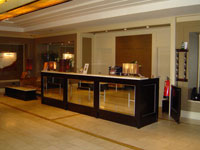 The Shamrock Lodge Hotel is a quiet hotel that was modernized and expanded last year. Conferences and concerts occur here regularly and it has been a quiet, oak-shrouded destination for wedding receptions for years. The hotel itself is tucked away off the main roads in a quiet corner of the town, adjacent to the old canal. It’s walking distance to local pubs and is a favourite among locals for Sunday lunch and quiet pints in the evenings.

The house began its life as the home of Micheal Monks in 1814. It was established as a hotel in 1951 by the late Mr. Frank Coen and was later purchased in the early nineties by the current owner Mr. Paddy McCaul.

The various function rooms in the hotel are named after distinguished residents of Athlone – the Parliamentarian T.P. O’Connor, the poet Oliver Goldsmith, the novelist John Broderick and the world famous tenor Count John McCormack. The restaurant is named Luain (after the legendary Innkeeper who catered for the needs of travellers crossing the Shannon at the Ford and gave the town its name – Ath Luain or the Ford of Luain).

Synopsis: A more secluded, quieter alternative to the more expensive hotels in town without sacrificing on amenities. 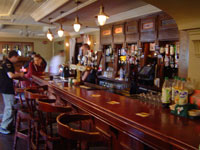 This hotel not what you’re looking for? There are plenty of other discount hotels to choose from.