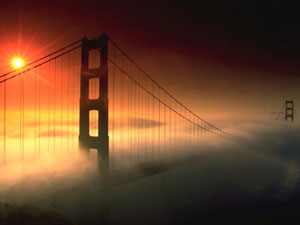 The thing is, as awesome as the bay is, it just doesn’t seem to register on the international radar as strongly as the southern part of the state. Disturbing proof of this was provided to me last year.

Here’s the deal: I don’t put the definitive article in front of my freeway names. I recycle compulsively. I rarely leave the house without a jacket in case the weather turns on a dime. I prefer my beer micro-brewed. I never refer to anyone as “buddy” (unless that’s actually his name). I was raised using computers (I actually still have a Commodore Vic-20 with a cassette tape drive). Chances are, my Palm pilot will allow me to be the first in any group to locate wi-fi in a public place.

In a nutshell, I was born and raised – and love – the San Francisco Bay Area.

So why am I always stopping through Los Angeles on my way home? Because – and only because – I have to.

Well, as of October Aer Lingus will be flying a Dublin – San Francisco direct flight.