Round Ireland with a Fridge – Tony Hawks 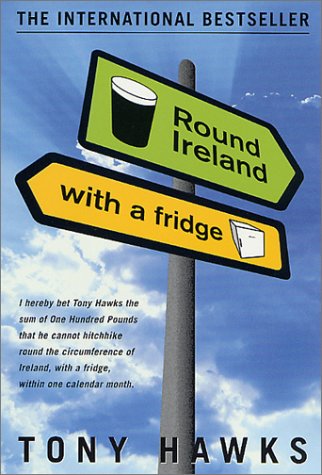 It’s hard not to applaud the idea behind this book. It’s also not hard, halfway through it, to get a little annoyed by the narration.

This book is actually British non-fiction describing the autobiographical journey of Tony Hawks as he attempts to fulfill a drunken bet he made with his friends to hitchhike around Ireland with a portable fridge (the kind you find in Frat guy’s dorm rooms). So far, so good.

Tony manages to garner the attention of Irish radio personality Gerry Ryan, bringing his endeavor to national consciousness and ensuring more than a few motorists know that if they spot some British dude on the side of the road with a fridge he’s not some kind of terrorist.

This is kind of where the book slows down.

Don’t get me wrong, it’s enjoyable. It may be just me, but I felt like the Irish people in the book were portrayed as absurd, two-dimensional characters and the country as a whole was painted as a bizarre, backwards place where the hitchiker with the fridge was not so much participating in the craíc but sort of ridiculing it.

Well, maybe it was that and the fact that our author seems really prissy and, despite his admirably mad endeavor, unwilling to – for example – consider staying in a hostel because it might be “dirty.”

This is where the backpacker in me just shook his head and had a hard time finishing the book.

Seriously, how can a guy willing to hitchhike around with a fridge be such a poncy momma’s boy?

Don’t get me wrong, it’s amusing, but by the time I finished Round Ireland with a Fridge, it mostly just made me feel sorry for the author and, as an Irish person, a little insulted.