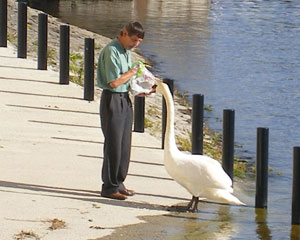 It’s probably not the best thing to be feeding them at all, but it’s REALLY not a great idea to stroll right up to them and stick out your hand, folks.

It’s not like they’re going to sprout fangs, horns and claws and tear a man to shreds or anything – but those wings can grow to several feet in length and they’re pretty powerful should they decide to whack you one. Changes are they’ll peck you in the eye first, but that’s hardly better, is it?

I know, I know – they’re beautiful animals and, at least around Athlone, they’re so used to humans they’ll come right up to you. Thing is, swans are mean. Mean and big – that’s no small bird. If you get within a few feet they’ll hiss and may attack. Watch for the proudly raised wings – that means they’re angry, not just showing off for the camera.

Seriously! I bought a swan a drink the other day and didn’t notice the position of his wings. Well! He spat in it, threw it in my face and stormed out of the pub. Talk about fowl tempered!