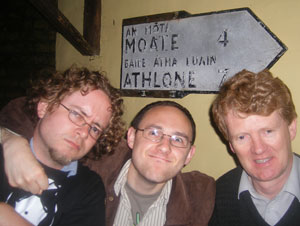 So last Christmas I described the anatomy of an Irish christmas party. I recently experienced another type of party: the Irish going-away work do.

Posing there in Sean’s beer garden under the old sign are myself, Guy Noir and the editor.

The evening started out innocently enough at Kin Khao Thai where we partook in some excellent Thai food and drank more overpriced Tiger beer (€4.20 a bottle! Ooof!) than we meant to.

My co-workers bought me a tuxedo t-shirt to prevent the unpleasant perspiratory side effects they had seen when I wear a real tux. Very thoughtful.

As is our custom when we go out, it was down to Sean’s Bar and the beer garden for a few sociable drinks. As the evening wore on, I experienced something very common that I hadn’t seen in a long time. I have mentioned in the past that the Irish like to sing when they drink, but this was an impressive display.

One of the girls decided it was time for performance and proceeded to go around the table soliciting a “song, poem or story” from everyone. In our little gazebo under the July evening downpour spirits were high and voices rose in song. As closing time approached, the second Irish custom took hold and everyone packed off to the nightclub.

Aware of the black hole that is the Irish night-time scenario, I bowed out at this point and headed home, the sound of singing co-workers still echoing in my head.