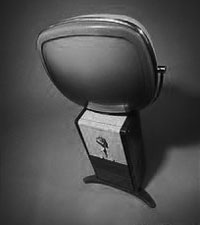 The inspector arrived and informed me that he had no license for the premises. I told him we didn’t have a television and he shot me a sharp look before making a note. He proceeded to tell me that a van with equipment to pick up a television signal was driving around the neighbourhood and that any television would be picked up. I assured him we had nothing to worry about, as there was no television on the premises.

“I’m not originally from here,” I said. “so I’m curious about this law. I edit videos, you see, and wanted to buy a few cheap old televisions to use as dumb monitors for editing purposes.”

“Well if you’ve a television on the premises, you’ll have to pay a license.” he said.

“I’d been told that before,” I replied, “so I ended up buying some LCD monitors instead.”

“But if I had a couple old television sets – you know, the big glass tubes, and pulled the receiver out of them to use just for my editing, would I pay a license? “

“What if I stuck a television receiver in my computer?”

“What about one of those little hand-held televisions that you can take with you?” I asked.

“Well, that’d be easy enough to hide,” says he, surprising me.

“I bought the wife a video iPod there for Christmas and she just downloads the TV shows she wants to watch – do we need a license for that?”

“No, no – that’s grand,” he said, starting away from the door, obviously tired of my questions.

I don’t know about you, but I still don’t understand this idiotic tax. What, exactly, is done with this money and why is it assigned to the presence of an archaic cathode ray tube rather than the television receiver device? What with broadband and satellite television doing away with the VHF/UHF television broadcast, what sense does this law make?