Brendan Hickey’s On The Verge 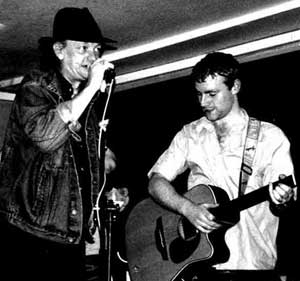 Brendan Hickey can be found every Wednesday night in Dublin’s Sin E (pronounced “shin – A [as in ‘hay’]”) hosting his evening of original music. If you happen to be in Dublin on a Wednesday night, this is definately someplace to stop in off the regular tourist circuit.

Brendan also hosts a Thursday evening radio show on Dublin South FM called “On the Verge” where he interviews the best of the original musicians he has had at his Wednesday showcases.

A poet himself, Brendan has an affinity for picking talent. Damien Rice, Mic Christopher, Damien Dempsey and Mundy are just a few of the now internationally famous Irish musicians Brendan has featured on his showcase before they hit the big time.

The great thing about what he does is that it’s so web-friendly. Every week he posts his radio interviews and mp3s of live acts online on his website. The atmosphere at the station is relaxed and bohemian and, well, loads of fun. I think Brendan creates a fantastic environment for the sometimes shy or eccentric artists he comes across and some of the archived mp3s are absolute classics.

Kim and I had the chance to be interviewed on the show as Kerbside, listen to our interview here.