What you see above you is the legendary soup of Beanies.

This stuff has been eluding my grasp for weeks now. Some time ago a co-worker told me about Beanie’s soup,

“It’s the best ever,” she assured me, “I used to have it for lunch every day last year.

High praise indeed. Supposedly, the recipe is a family secret and the stuff is prepared fresh every morning from this secret recipe. The long lines outside of Beanies do lend some authenticity to this rumour.

Positioned just off what will be the entrance of the new town centre and nearby Athlone library and Civic Offices, Beanies sits at the “Y” junction of The Bawn (where cattle used to be kept when Athlone was a walled city) and Dublingate Street (where the gate of said wall opened to the Dublin road). Up until some time last year, Beanies was the only thing in Athlone that was open 24 hours. It was called “The Kiosk” and carried all the bits and bobs you might desire at 3 in the morning.

Apparently, this arrangement was not a happy one. In the owner’s words, “It was a pain in the hole.” So it was closed and reopened as a coffee shop/sandwich bar this year. It has proved to be a real success. Beanie’s is a closet of a place – maybe 7 feet deep, it’s a narrow slice into the wall and barely has room to house its coffee and sandwich operations, let alone any customers; it would be a strictly takeaway service venue.

However, it’s in the perfect place: right in the heart of Athlone where the main city centre road is narrowest (so narrow the sidewalks on either side are about 7 inches wide and cars often must stop to let opposing traffic through) at the footprint of a large pedestrian crossing, beanies’ shopfront opens right onto a large brick plaza, perfect for tables. 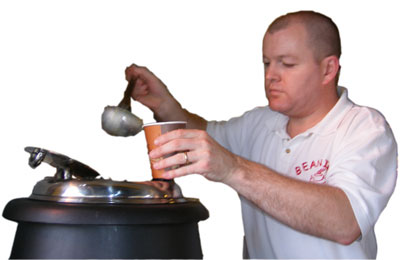 The last time I tried to get this soup things turned out a bit disasterously. So much so that I questioned whether I was meant to try it. I’m happy to report this time around I was much more successful. Myself and the muchkin fetched a portion for ourselves and the grandparents and brought it safely home. I have to admit as we got closer to the house I began to get a little nervous – expecting the soup to spontaneously explode or something, I guess.

SO . . . the verdict? Good. Needs a little salt (but I like salt). Definately one of the better soups in town. Cosmic? Not really. But very, very good.