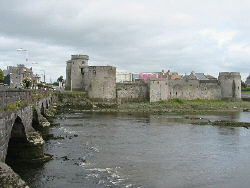 Limerick may be most well-known recently to those outside Ireland as the birthplace of Frank McCourt, author of the bestseller “Angela’s Ashes.” The picture McCourt paints of Limerick when he was growing up is certainly nothing the city tourism office would want published today, and thankfully modern-day Limerick is not having much trouble attracting tourists. In fact, McCourt’s book has brought loads of people to the city! Limerick also provides more of a real-life look at Ireland, as it is more of a real city than some of its more touristy neighbors.

A short trip from nearby Shannon (the city with the closest airport), Limerick has a population just under 91,000 people and lies in the southern part of the country. It is well worth a day trip if not a weekend stay. While it once had a bit of a bad reputation for higher crime rates (once even being nicknamed “Stab City”), the crime rate is not much different from other cities its size and most serious crimes seem to be linked with Limerick gangs and restricted to certain parts of the city (areas where tourists do not usually go anyway). Visitors to Limerick should have nothing to worry about, especially if they stick to the more popular areas of town and do not go into dodgy areas after dark.

Central Limerick is divided into three sections, known as “English Town,” “Irish Town” and “Newtown Pery.” English Town is where you will many of the sights in the city, although Irish Town also has some interesting older streets. Newtown Pery is the part of town to visit to see all the Georgian architecture the city is famous for.

Here are a few of the things to do in Limerick:

Limerick’s nightlife is active, and there are plenty of places to spend an evening – from more traditional Irish pubs to more modern nightclubs and bars. Because this is a university town, you can be assured that some places will be overflowing with students and a vibrant, young energy.