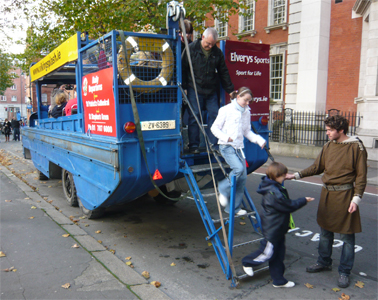 On my recent visit to Dublin I had taken a couple of the standard-issue city bus tours, and while those were fairly entertaining, there wasn’t anything special about them at all. They took you past the main sights while offering some decent commentary, using pretty much the exact same jokes each time. They were far better than a recorded-commentary bus tour, but still, I was weary about all city tours at the point I realized I hadn’t yet tried the Viking Splash Tour of Dublin.

The Viking Splash Tour turned out to be the best of all the tours by quite a bit. Much of the route was the same as the hop-on/hop-off bus tours, but of course one of the things that makes this one different is the tour is done in a vehicle called Duk, which is amphibious. It sounded like nothing but a gimmick until we actually drove into the Dublin Docklands, where the tour continued with even more interesting sights that aren’t visible by land, and a unique look at the whole place.

The only drawback to this is the Duk stops for 5 or 10 minutes before it can plunge in the water so some waiting helpers can attach some safety pontoons, which the tour guide said weren’t necessary anyway and only used for precautionary purposes. Everyone also has to don a life jacket, unfortunately, but the whole thing is well fun enough to make up for the small hassle.

Most expensive, but do it anyway 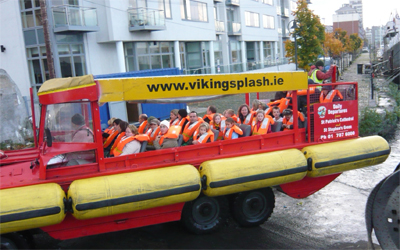 When you factor in everything it’s not too surprising that the Viking Splash Tour would cost a bit more than the normal bus tours, and being a price-conscious traveler I was weary of that fact, but in the end I wish I had skipped the other tours and done only this one. It’s easy to say that in hindsight, which is why I’m mentioning it for anyone who’s yet to do any of the tours.

It also surprised me how packed the Viking Splash Tour vehicle was, especially considering the buses never seemed too full. The Viking Tour only leaves every 30-40 minutes most of the year, but only 4 times per day in the winter months. Word has gotten out that it’s great, so you are advised to book ahead.

What makes it fun and unique 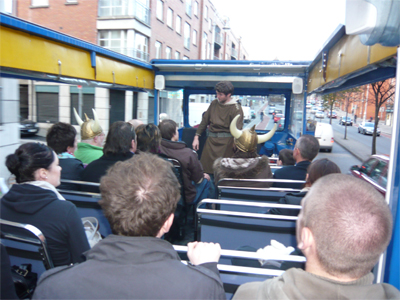 After you climb on board the Duk, which has been made up to look like a Viking ship, you’ll have a driver as well as a guide, who is dressed for the part. The guides are all extremely entertaining actor-types, who know and love the city, and have ways of wringing more fun out of the assembled group than you’d think was possible.

At the risk of overselling this part, my group was howling in laughter from nearly start to finish. The greatest highlight was that the guide taught the whole crew how to do a “Viking Scream” at unsuspecting pedestrians we were about to pass. He’d announce the victim as we approached, and they would often show a short look of terror at a Viking bus full of people screaming at them, but then they’d usually laugh right along with everyone in the Duk.

The tour around Dublin is also very informative, and since I can compare it to the other bus tours I can reveal the only things they leave out are a trip to the other side of the river and a look at the giant park and historic prison, but you also get to see U2’s recording studio and a penthouse owned by Colin Ferrell while out in the Dockland’s, so it’s a pretty good trade off, if you ask me.

Duration: 75 minutes (or a bit longer)

Check out the official Viking Splash Tours site for more details and the current schedule of departures.